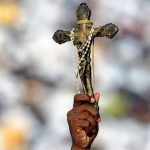 Things to know as a Catholic

Written by on 27th February 2018. Posted in Catholic Teachings