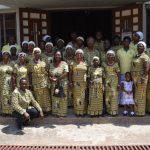 The Founding Fathers came to realize that Gas were mere “floating” members in the Catholic Church and since the Church was on the soil of the Gas, they felt the Gas should be seen to playing a more significant role in the affairs of the Church. They realized that this could only be done if the Gas were mobilized and organized, hence the formation of St. Gabriel’s Guild in the year 1965.

Why the name St. Gabriel’s Guild?

Gabriel was the Archangel who was sent by God to bring His message to His chosen ones.  Therefore, to mobilise the Gas, the name “St. Gabriel” was chosen from other suggested names so that the Guild members could carry out the duty which the Archangel Gabriel did, ie to spread the Good News among Gas and to bring then into the Church.

Aims and Objectives of the Guild

To this end, the Founding Fathers adopted the following aims and objectives of the Guild.

The Guild, which shall be a non-profit making organization shall seek speiritual and temporal welfare of its members.  It shall mainly:

First (1st) and Third (3rd) Sundays of every month after the second Mass.

Nii Noi Dowuona IV was the first president of the Guild with the following as the executives:

The Guild has a Choir. In the mid-1970s during one of the Guild’s meetings, the President of the Guild announced that the Guild was going to start Bible Studies to enhance the spiritual growth of members. The idea was hailed by all, but the core group which started the Bible Studies after the announcement was made up of the late Mr. James Q. Smith, Mr. and Mrs. A.E.T. Adjei, Mr. and Mrs. E. Tetteh, Mr. and Mrs. J.K. Adjaye, Mr. Cecilia Robertson, Mrs. Nicholina Amu and Ms. Josephine Mottey. The Bible Studies began with a short prayer followed by a hymn and the harmonious blending of the few voices convinced us that we had the potential of a good choir.

In order to attract more members to join the Bible Studies, we told the other members of the Guild that in addition to the Bible Studies we were learning some hymns. Mr. A.E.T. Adjei had then offered to teach us hymns.  We met once a week on Thursdays.  As we predicted, a few more members joined the core group, but after a while, interest in the group waned and the Thursday meetings were discontinued; but the idea of forming a singing group still lingered in the minds of the core group.

In those days, apart from reading of the lessons in Ga and the interpretation of the homily in Ga, there was no other sign of a Ga presence in the Church and the only way we could project this image was to sing some Ga songs during liturgical celebrations.

With this in mind, we tried to involve the whole group in the singing by devoting some few minutes to practice some hymns during the normal meeting days on Sundays. However, this did not go down well with some members since the singing practice tended to prolong the meetings.

The Sunday singing practices were also discontinued and the core group came together in the early 1980s and sought the assistance of Mr. Peter Nii Dan-Okine.  This was precisely in 1982.  Mr. Archibald Okine of the Sacred Heart Parish also assisted us on a few occasions.

One of the Guild members, Madam Elizabeth Mensah, not satisfied with this ad-hoc arrangement, offered to ask her cousin, Mr. Andy Addo to assist us. Andy’s arrival, with his golden baritone voice, re-kindled interest in the choir as he taught hymns and secular songs. On a few occasions when the Choir performed at wakes, the public, having gotten used to Catholic Lartin songs, wondered the Group was actually Catholic.

Mr. Addo handled the choir from the early 1980s until about 1990 when his posting to Asahiman began to affect his attendance at practices. During this period, Mr. Joe Eddie Lamptey occasionally came in to lend a hand.  Andy occasionally came with a friend whom we knew as Duke to teach us.

Given the difficulties to get Mr. Addo as the main director, the choir appealed to Mr. Peter Nii Dan-Okine to return and assume the leadership of the Choir. He had so many choirs under his tutelage but he did not hesitate to accede to our request and from 1991 he took over the choir which he transformed into what we have today.

The choir rehearsal days are Tuesdays and Thursdays.